FX daily: Can the ECB help the euro?

The highlight of today’s FX session will be the European Central Bank meeting. We are looking for a sub-consensus 50bp hike which in theory may see EUR/USD edge lower after a modest recovery overnight. We will also hear a speech from Fed Chair Jerome Powell at 1510 CET. As usual, we expect the dollar to remain supported on any intra-day dips

The dollar has entered another consolidative phase – albeit very close to the highs of the year. Following Fed Chair Powell’s hawkish Jackson Hole speech a couple of weeks ago, the pricing of the Fed cycle has remained remarkably steady. The cycle is priced to peak around 3.90% next spring and soften to 3.60% by the end of the year. We suspect that year-end 2023 pricing of a cut still could be priced out as the Fed continues to emphasise that policy needs to be taken into restrictive territory and to be kept there for a while. A fresh dose of Fed hawkishness should come in a speech by Fed’s Powell to the Cato institute at 1510 CET today.

With the Fed/dollar side of the FX equation pretty steady, there is an increasing focus on how trading partners will react. Overnight, the Reserve Bank of Australia’s (RBA) Governor Philip Lowe said that it would probably be shifting to a slower pace of hikes – comments that weighed on the Australian dollar. We comment on today’s main event, the ECB meeting, below, but there is also much focus on USD/JPY this week. This has surged over 3% and remains in the vanguard of the strong dollar/energy crisis story.

Japanese policymakers have increased their rhetoric in support of the yen – e.g. calling the moves one-sided – but equally, comments from the finance minister that a weak yen has ‘its merits and demerits’ are not providing a consistent message here. In early European trade, USD/JPY has sold off on news of a meeting between the Bank of Japan, Finance Ministry and Financial Services Agency – potentially to discuss FX intervention. But the base case is probably that we do not see intervention until closer to 150 in USD/JPY. And the FX options market certainly does not see the imminent risk here. Still, USD/JPY implied volatility looks too cheap in our opinion.

The ECB meeting will be key for European currencies and the DXY today. We are not looking for a significant reversal anytime soon and think corrections probably hold the 109.00/109.25 area

EUR: ECB to comment more directly on the euro?

We have also outlined a scenario analysis in our ECB crib sheet. Our base case is that the ECB only hikes 50bp versus the 75bp consensus and the 67bp priced by money markets. In theory, that should be a euro negative and we have a base case of EUR/USD dropping back to 0.9900.

In our experience, EUR/USD has always been a tough call on ECB day and the upside risks to the euro stem from a hawkish message from the ECB. Particular interest might be had in the 2024 CPI forecast which in June was predicted at 2.1%. Upside or downside revisions here could help determine whether the market is correct in pricing a 225bp ECB tightening cycle into 2023. Certainly, our macro team thinks the ECB will not deliver on such a cycle.

It will also be interesting to see how President Christine Lagarde (press conference 1430 CET) handles any questions on the weak euro – where EUR/USD sub parity is contributing to the energy shock. Her hands will be tied as to what she can say – the G7/G20 agrees on market-determined exchange rates – but any comments along the lines of the ECB is ‘watching FX closely’ could trigger a brief counter-trend rally in EUR/USD. That said, EUR/USD is trading down here for solid macro reasons and we doubt any intra-day rallies last.

We would assume that 1.0100 proves the extent of any EUR/USD short squeeze and would favour a move back to 0.9900.

GBP: How fiscal package is funded will drive sterling

The highlight of today’s sterling session will be the announcement of the new UK government’s energy package and in particular how it is funded. The announcement comes around lunchtime. The greater amount of public funding, the greater the Gilt supply and the greater the pressure on sovereign risk and the pound. Our team discusses the challenges faced by this topic here.

After a brief rally earlier this week, the pound is looking soft again. Our base case would assume that GBP/USD struggles to break 1.16 and EUR/GBP tests the June high at 0.8720. Basically, new PM Liz Truss is undertaking a highwire act and it will be a real challenge to refloat the UK economy without concerns growing about how the UK funds it.

In line with surveys, the National Bank of Poland hiked the key rate by 25bp to 6.75%. The MPC statement saw only cosmetic changes. The council hopes the slowing economy will translate into slower inflation and the forward guidance for rates remained unchanged. Today, we will see Governor Adam Glapinski’s press conference which should show the full picture and hint at what else we can expect this year. With markets expecting a bit more from the central bank after surprisingly high inflation, rates are lower across the curve, which has led to the interest rate differential falling to its lowest level since March of this year. The Polish zloty strengthened slightly, likely supported by the fall in gas prices. The drop in rates over the past two days may be enough to cover the governor’s dovish press conference, but we hardly see the outcome supporting the zloty today. Thus, as we mentioned yesterday, we see room for an upward move into the 4.74-4.76 EUR/PLN band.

Meanwhile, in Hungary, the forint has reached its strongest levels since mid-August after rates jumped by 15-30bp across the curve, though on zero liquidity. So while the forint has followed the rate move, we see no reason for levels below 400 EUR/HUF for now. However, August inflation could come into play today. Peter Virovacz, our economist in Budapest, expects a jump from 13.7% to 16.2% year-on-year, above market expectations. Part of the jump is due to changes in the fuel price caps. Thus, a surprise in inflation could support rate hikes and support current forint levels. However, to keep levels below 400 in the long term, we would like to see some tangible progress in EU talks, which could come in the coming weeks. 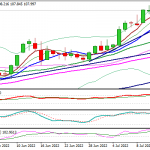 NZD/USD in a recovery mood [Video]

Musk has clipped the wings of Bitcoin

Higher ECB rates may not reverse the euro weakness [Video]