Will the ECB drive gold prices higher or lower? [Video]

Gold prices are currently moving in a tight range as traders await a fresh fundamental spark to ignite the precious metals next big move.

Looking ahead to this week, trader’s attention has now shifted to the European Central Banks monetary policy meeting, scheduled for Thursday.

As one of the “Big 4 Central Banks”, this event is anticipated to be a major market mover – especially as the ECB is expected to deliver its first interest-rate hike since 2011 and end an eight-year experiment with negative rates as economic prospects worsen.

This week, European Central Bank policymakers will discuss the possibility of raising interest rates by half a percentage point, exceeding their own guidance and most economists’ expectations.

By failing to move aggressively with their first interest-rate hike in more than a decade – the ECB risks getting left behind as peers push ahead in the fight against rapidly surging global inflation.

In contrast, the likes of the Bank of England and the U.S Federal Reserve have launched an aggressive fight against the red-hot rise in the cost of living.

The Bank of England has lifted its own base rate at five consecutive monetary policy meetings to 1.25% and is set to hike rates again in August. Elsewhere, the Federal Reserve recently abandoned previously-laid plans to deliver a half-point interest rate hike and instead implemented the first 75 basis point increase – its biggest since 1994.

Expectations are now running high, that the Fed could be on the cusp of delivering an “historic super-sized” 100 basis-point rate hike at the central banks upcoming policy meeting later this month.

A string of big rate rises by the Federal Reserve has now put pressure on central banks around the world to follow suit to counter soaring inflation and the strong dollar.

Canadian policymakers became the latest to surprise markets with a bigger than expected rate increase, opting for a 100 basis point hike last week – the largest by any G7 economy since 1998.

Attention has now shifted to the European Central Bank – with a long-list of ECB council members – including those from Baltic countries where inflation is close to 20% – publically calling for a 50 basis point hike on Thursday.

The meeting will enviably shed more light on whether ECB President Christine Lagarde’s pledge to curb surging costs is just window-dressing or an actual shift towards a more hawkish monetary policy stance to achieve what the European Central Bank hasn’t achieved for a decade – which is getting inflation back under control.

Where are prices heading next? Watch The Commodity Report now, for my latest price forecasts and predictions: 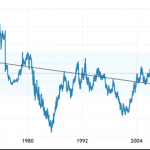 A euro deep below dollar parity is now likely

Pound cuts oversold against the dollar but must fight economic headwinds

Algeria: A window of opportunity not to be missed

All eyes on the jobs report

Can central banks go bankrupt? The perils of high-interest rates after QE

All eyes on the jobs report

Can central banks go bankrupt? The perils of high-interest rates after QE


Warning: array_sum() expects parameter 1 to be array, null given in /home/betbonus/fxvnpro.com/wp-content/plugins/jnews-social-share/class.jnews-social-background-process.php on line 111